The object of the game

At each end of the field are soccer goals that the teams must defend. The object of the game is to put the ball in the opponent’s goal and the team that does this most in the allotted time wins. Each team works to advance a ball down the field by dribbling, passing, heading, and kicking. Field players cannot use their arms or hands; only the Keeper (or Goalie) can use hands. A goal counts as one point and is scored when the soccer ball completely crosses the opposing goal line between the posts and under the crossbar.

What is needed to play?

How long is a game?

Kicks During The Game

Center Kickoff- Starts play at the beginning of both halves and after every goal. It is a kick taken from the center circle in which a player from the kicking team strikes the ball forward to his or her own teammate.

Corner Kick – Takes place when the defensive team has kicked the ball “out-of-bounds” over its own end line. The corner kick is taken by a player on the attacking team from the “corner arc” nearest to where the ball left the field.

Goal Kick – A kick taken by a defensive player (often the goalie) after the offensive team has kicked the ball out-of-bounds over the end line. The goal kick is taken from within the goal area and must clear the penalty area before another defensive player is allowed to touch it.

A Few Rules To Know!

Rules regulate player conduct and how the ball may be played. When a player commits a foul, a penalty is called. Depending on the severity, degree of intent, and location of the foul, the referee will award either a “free kick” or a “penalty kick” to the opposing team. A player commits a foul if he or she kicks, hits, pushes, holds, charges, or trips an opponent, or touches the ball with his or her hands – whether intentional or not.

Offside – Called against the offense when one of its players moves without the ball behind the last line of defense, with only the goalie separating the player from the goal. When a teammate passes the ball forward to this player or shoots on goal, the violation occurs and results in an “indirect” free kick for the defense. This rule applies to U10 and up age brackets.

Hand Ball – No player, other than the goalie, may intentionally touch a ball in play with his or her hands or arms. This violation awards the opposing team a “direct” free kick.

Holding and Tripping – If a player deliberately holds or uses any part of his or her body to trip an opposing player, a direct kick is awarded to the fouled player.

High Kick – A violation on a player who swings his or her foot close to and above the waist of an opposing player. This foul generally results in a direct kick.

Free Kick (Indirect or Direct) – Awarded as the result of a foul. Depending on the degree and severity of the foul, and at the discretion of the referee, a direct or indirect kick is taken by the non-offending team. Generally, a free kick is taken from the spot where the foul occurred, and no opposing player may be within ten yards of the ball before it is kicked.

Indirect Kick – A free kick awarded for less serious rule infractions such as an offside. A goal may not be scored off an indirect kick until the ball touches at least one other player from either team.

Direct Kick-Awarded on more serious or deliberate infractions such as tripping and holding. It is a free kick aimed directly at the goal. The player taking the kick may score a goal without the ball first touching any other player.

Penalty Kick – A kick awarded to the attacking team when a defending player commits a major foul or a hand ball within his or her own 18-yard penalty area. The resulting shot is taken from the penalty mark; only the kicker and goalie may be in the penalty area during this kick. The goalie may not move off the goal line until the ball has been touched by the kicker.

Yellow Card – A caution warning issued by the referee to any player who commits a severe foul or plays in an unsportsmanlike manner.

Red Card – If a player has already received a yellow card or commits an overly aggressive foul, the referee will issue a red card, removing that player for the duration of the game. The player receiving a red card may not be replaced, and his or her team must play with one less player for the remainder of the game. 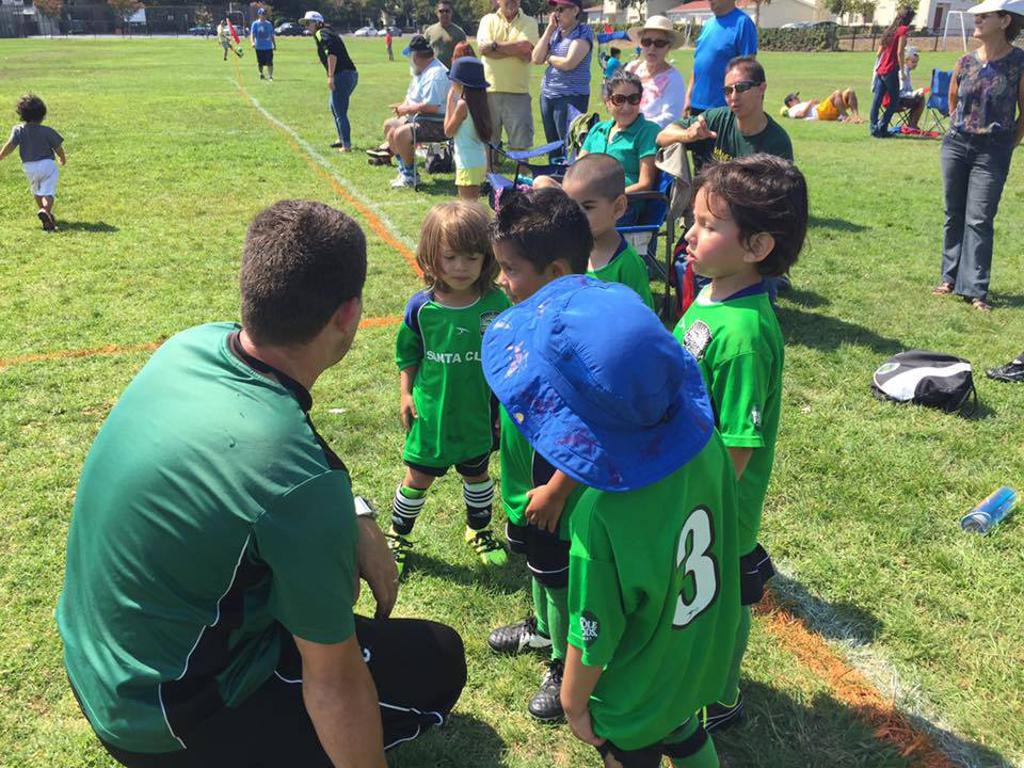 The Santa Clara Youth Soccer League is an all volunteer organization and we are always looking for additional help to run our league.

Do you have any special talents and skills that can assist our league? Do you have any suggestions and ideas how to improve our program? We welcome your feedback and help.

Join our Board of Directors

Join a passionate group of parents who support your kids and the sport of soccer!  We are always looking for adults to join our Board of Director and help organize the league. Although we only offer a recreational soccer program in the Fall, the effort to plan and organize the season takes place year-round. Visit our Board of Directors page to view available open positions. Helping-out your soccer league is easy and very fulfilling.

The Santa Clara Youth Soccer League cannot run without the passionate and kind parents that volunteer to coach soccer teams in our league.